Aston Villa star John McGinn has revealed that he couldn’t help but laugh amid speculation linking him with a move to Man Utd.

As noted by The Sun, it had been claimed that Sir Alex Ferguson was pushing the Red Devils to make a move for McGinn last month, with Villa said to value their star man at £50m.

The 24-year-old was a pivotal figure in their promotion from the Championship last year, and he will undoubtedly remain vital to their hopes of avoiding relegation this season.

In turn, it was never likely that United would be able to prise him away from Villa Park, but given the size and stature of the club, it could have been tempting.

However, McGinn has now revealed his reaction to the rumours and has revealed that while it was flattering, it was perhaps never really a realistic option this summer.

“I had a little chuckle at it to be honest. I’m sure a lot of people did,” said McGinn, as quoted by talkSPORT. “It is up to me to go and prove it is justified. At that point my whole mindset was on Villa and being successful here.

“I have still got so much left to learn and prove. In the environment here I am appreciated. I’m loved and respected by everyone. There is no better feeling. I still have to pinch myself driving in. I feel like one of the main players here.

“There really is no better feeling. I still need to improve and get better. To have any speculation lingering about isn’t what you want. I’m just glad to be settled and to focus on the next five years.”

As seen in the tweet below from the club, McGinn signed a new long-term deal at Villa earlier this week, and so it’s fair to say that a move to Old Trafford won’t be happening any time soon.

Instead, his focus will be on Saturday evening as Villa take on Tottenham in their first game back in the Premier League, while Man Utd and Ole Gunnar Solskjaer prepare for Chelsea on Sunday.

It could be argued though that the speculation did make sense, as with Ander Herrera leaving Old Trafford after his contract expired, McGinn could certainly have played a similar role given his energy, tenacity and work ethic off the ball coupled with his quality on it.

We are delighted to announce that John McGinn has signed a new five-year contract with the Club. ?? 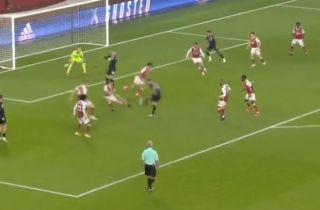