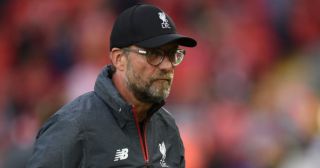 Liverpool are reportedly eager to give a short term contract to goalkeeper Andy Lonergan following Alisson’s injury against Norwich City.

The Brazil international, who is currently regarded as one of the best keepers in the world, sustained a calf injury during the first half of the Reds’ Premier League opener while taking a goal kick, an injury which was confirmed by the club’s official website.

SEE MORE: ‘He can have my calf’ – These Liverpool fans react to news of Alisson’s potential six-week lay off

Alisson will certainly miss Liverpool’s Super Cup match against Chelsea and some matches after that as well, as also confirmed by the same report from the club’s official site. Barring Adrian, the only goalkeeping option the Reds have is Caoimhin Kelleher.

According to Football Insider, Liverpool are interested in signing Lonergan on a short-term deal. The 35-year old played in some of Liverpool’s pre-season matches but was not given a deal after the European champions signed Adrian after Simon Mignolet left for Club Brugge.

Provided Alisson’s injury keeps him out for a while, the Reds will sign Lonergan, who is currently a free agent and thus can be signed even after the transfer window has shut.

Lonergan has played more than 400 matches in his professional career so far but none of them have been for a top flight club.

The 35-year old Irishman has a great deal of experience and should be a suitable back-up option for Liverpool.