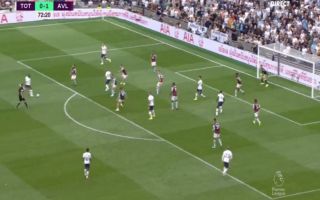 Tanguy N’Dombele made an impressionable start to life in the Premier League today, as the Spurs star scored on his league debut for the club during their match against Aston Villa.

Spurs were going into the 73rd minute 1-0 down following an early goal from John McGinn, however N’Dombele soon stepped up to draw the home side level.

Ndombele gets his first goal for spurs to make it 1-1 vs Villa #TOTAVL pic.twitter.com/S53eASkIke

After being given the ball by Lucas Moura, the Frenchman fired his side-footed effort straight past Tom Heaton and into the Villa goal, leaving the former Burnley shot-stopper with no chance.

Not a bad way to introduce yourself to the Premier League!