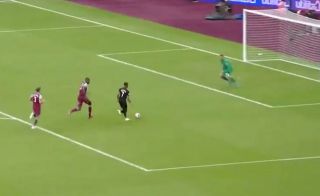 Man City made a stunning start to the new Premier League season with a 5-0 win over West Ham as Raheem Sterling ran riot on the opening weekend.

The England international bagged a hat-trick in the second half against the Hammers with both Gabriel Jesus and Sergio Aguero also getting on the scoresheet.

It was quite the response to Liverpool’s 4-1 win over Norwich City on Friday night, with City looking to make an early statement perhaps amid question marks over their ability to continue to show the same level of hunger and desire to win trophies.

Those suggested issues were shattered with their brilliant performance, and it was led by Sterling who completed his hat-trick with a classy finish, as seen in the video below.

City’s next stop is Tottenham at home next weekend, but they’ll be delighted with the way that they’ve started as they look to successfully defend their title this year.

Sterling with the Hat trick and @ManCity with a 5 ?? Performance!! They will be the team to catch!#Sterling #MCFC #PremierLeague #WestHam pic.twitter.com/3DW2JTUFKq

Manuel Pellegrini was trying to use the Manual Goalkeeper Movement on FIFA and let Sterling score his third. pic.twitter.com/66xo2bCfXP