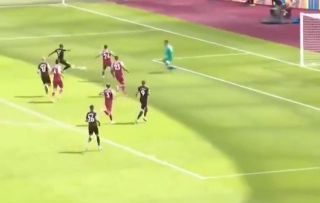 Man City took a 2-0 lead over West Ham on Saturday as Raheem Sterling and Kevin de Bruyne linked up brilliantly to slice the Hammers open.

Gabriel Jesus had given the reigning Premier League champions the lead in the first half, and they certainly turned on the style after the break.

As seen in the video below, De Bruyne’s surging run from midfield broke through the West Ham defences and he laid off a perfectly weighted pass to find Sterling who applied the finishing touch.

Just minutes later Sterling thought he had turned provider as Jesus bagged his second of the game, but the goal was ruled out for offside with the most minimal of margins involved.

Pep Guardiola didn’t look particularly impressed from the bench as his players remonstrated with the referee, but they will be delighted with taking a two-goal lead to put themselves in a strong position to claim all three points.