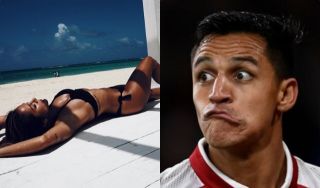 A Chilean TV presenter has claimed to have been approached by Manchester United star Alexis Sanchez despite them barely knowing each other.

The Red Devils flop hasn’t had much luck on the pitch in recent times so was clearly hoping to score off it as he unsuccessfully tried to get with the immensely attractive Natalia Mandiola, so maybe lady luck is with those who take advantage of these promo codes and don’t punch above their weight and stick to what they know best.

To be fair, looking through some of her pictures on her Instagram page, it’s easy to see why anyone would be keen to try their luck, but it sounds like Sanchez might have put her off by being overly eager.

The 30-year-old is alleged to have got Mandiola’s phone number off a friend in a club before contacting her about getting together the next day, according to the Sun.

A TVN producer then contacted Mandiola on Sanchez’s behalf as the United ace clearly got a bit desperate, and she admits she didn’t like the way he handled the whole situation.

Mandiola said: “There was something I didn’t like and a side-stepped it: he invited me to his house. He was a stranger for me and I wasn’t going to go into his house.”

The Sun’s report goes on to explain that Sanchez now seems to have a new girlfriend, but that this exchange took place while he was single.