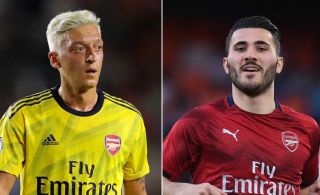 Arsenal duo Mesut Ozil and Sead Kolasinac reportedly continue to be caught up in a London gang war and are under 24-hour guard.

This hugely distressing situation has also led Kolasinac’s wife Bella to leave for Germany, vowing to never return to the UK, according to the Sun.

Neither player will be involved in Arsenal’s Premier League opening day match against Newcastle United due to security concerns, as thugs continue to threaten to rob their homes.

Ozil and Kolasinac were notably attacked by a gang last month, with Kolasinac at the time able to fight them off with his bare hands, as reported by the Daily Mail.

It seems the criminals are not content to stop there as Ozil and Kolasinac face major concerns over their safety.

The Sun quote a source as saying: “Word came back from the other gangsters that they would not be intimidated.

“To show they were serious, the thugs issued more threats to the Arsenal players and refused to be cowed.

“It was thought that originally the robbers wanted their watches but now they have been told that they want everything the pair have.”

This is certainly an unpleasant story to hear about, whatever your footballing loyalty, with two professionals likely being targeted because of their fame and wealth, leaving them unable to properly do their jobs or even go about their everyday lives.