The Blues will be without their long-time talisman Eden Hazard and it will be the first competitive match for new manager Frank Lampard. Last time Chelsea took on Manchester United in their Premier League opener, they went on to win the league.

MORE: Chelsea given three reasons to expect a difficult season ahead of opening day test at Manchester United

In the past three seasons, the Blues won their first away game in the Premier League. However, this time it will be very difficult for Chelsea to maintain that streak as Manchester United will be eager to put last season’s behind them and start strongly this time.

The likes of Ruben Loftus-Cheek and Callum Hudson-Odoi will certainly miss out as they are yet to recover from their respective injuries. However, the Blues have many of their key players from last season available for today’s game, starting with goalkeeper Kepa. The Spaniard kept 14 clean sheets in the Premier League last season and there’s a good chance that number will increase this year.

David Luiz’s departure to Arsenal surely opens up a spot for Andreas Christensen. The Danish international made sporadic appearances in 2018/19  but he’s expected to be involved regularly this season. Antonio Rudiger has just returned from injury so Lampard might prefer giving Kurt Zouma a place in the starting XI this time.

The Spanish duo of Marcos Alonso and Cesar Azpilicueta will be the ones who will certainly feature for Chelsea on the left and right flanks respectively. The Europa League champions will be heavily relying on their midfield to set up goals this season. However, Chelsea’s star midfielder N’Golo Kante might be benched today as a precautionary measure since he has just recovered from an injury.

Jorginho will certainly start as will Ross Barkley who was pretty impressive for the Blues last season. The third midfield spot will most likely be taken by Mateo Kovacic although Lampard could also consider Mason Mount who was quite impressive for Derby County last season and did very well for Chelsea in their pre-season matches.

Christian Pulisic will make his Premier League debut today and with Eden Hazard gone, the young American will certainly play as left winger for the Blues now. At right wing, it’ll be the new owner of Chelsea’s No.10 shirt Willian.

With no Alvaro Morata or Gonzalo Higuain now, Olivier Giroud is undoubtedly Chelsea’s premier striker now and he Lampard will be hoping that the Frenchman’s performances this season are like those in last season’s Europa League. 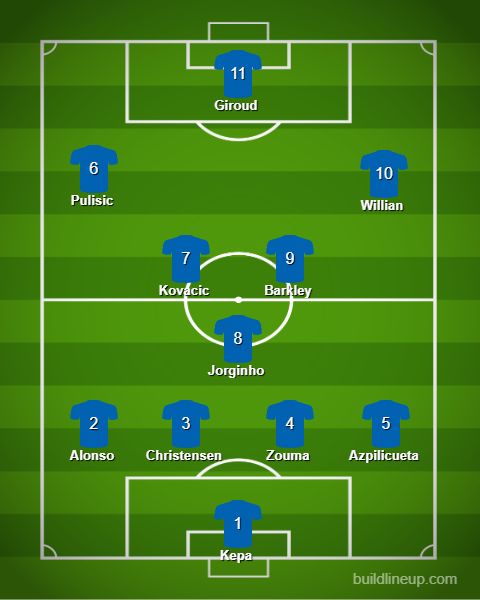