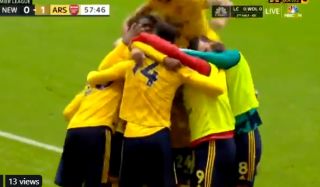 Arsenal new-boy Dani Ceballos joined in the celebrations from the bench as Pierre-Emerick Aubameyang put the team in front against Newcastle.

Watch below as Ceballos joins in the team huddle, only to emerge clutching his face and looking in some discomfort.

That elbow to the face, I feel Ceballos pain ?

Ceballos took a whack in the face celebrating ??

Ceballos getting an elbow in the face there ? welcome to the Prem pic.twitter.com/6FyNvdVu10

It’s not entirely clear how he attained this knock, but obviously it wasn’t anything too serious!

Ceballos later came on off the bench for his Arsenal debut after joining the Gunners on loan from Real Madrid in the summer.

Arsenal fans will now be hoping to see what he can do once he links up with his new team-mates on the pitch.