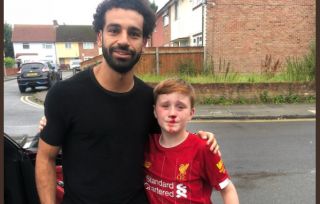 A young Liverpool fan was left with a bloody nose after crashing into a lamp-post to try to get the attention of Reds star Mohamed Salah.

See the tweet below for a fuller account of what happened, with Salah showing what a class act he is by going back and getting photos with the fans.

@MoSalah thank you for coming back to check on my boys after Louis KO’d himself trying to get a wave! He loves you so much and the pain went away instantly when you came to give them a hug. A nose reset worth well worth it he said. You are a top man and a true gent! #EgyptianKing pic.twitter.com/wrmHc4vxB9

It’s clear to see one poor kid ended up in a pretty bad way after colliding with the lamp-post, but perhaps it was worth it after all as he got the chance to meet one of his heroes.

Salah is one of the biggest names in world football and scored his first goal of the season in Liverpool’s opening day win over Norwich City.