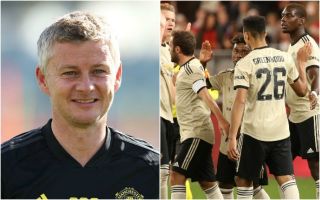 Graeme Souness has singled out Manchester United new-boy Harry Maguire as a player who is going to have an ‘enormous impact’ at the club this season.

The England international recently joined the Red Devils from Leicester City, having shone during his time at the King Power Stadium to earn a big-money move to Old Trafford.

MORE: Man United duo out, major exits at Tottenham – 10 big transfers that could still go through at Premier League clubs after deadline day

Maguire certainly looks a top talent ready to make the step up to a higher level, and Souness is clearly confident the 26-year-old has what it takes to be a hit with Man Utd.

Writing in the Times, the former Liverpool star also suggested missing out on Maguire would end up being a blow for Manchester City, as he suggests £80million is still a reasonable price to pay for the player.

“They will be a better team with Harry Maguire,” Souness said. “I don’t care if you’re Man City or United, you should have pushed the boat out for him, even at £80m, because he can have as big an influence at United as Virgil van Dijk has at Liverpool.

“When Leicester go behind, I see Maguire stepping into midfield and wanting to force the issue. I don’t see that from Van Dijk, he’s happy to take care of business at the back. Is that because Van Dijk has better players in front of him or because Maguire is a different type of character, who wants to be the difference?

“City have missed a trick because Maguire will have an enormous impact at United.”

City could no doubt have done with a top signing in defence after losing Vincent Kompany, though of course they still have plenty of other quality options in that area of the pitch.

United fans, however, will hope Souness is proven correct about the potential impact Maguire could have on their side after watching so many hapless defensive displays from the likes of Chris Smalling, Eric Bailly and Phil Jones last season.