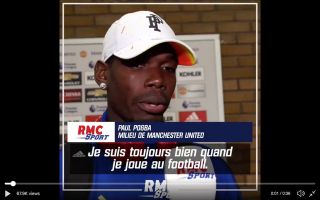 Paul Pogba seems to have closed the door on a potential exit from Manchester United, here’s what the star had to say after today’s 4-0 victory over Chelsea.

Manchester United superstar has finally broken his silence on rumours surrounding a potential exit from Old Trafford this summer. The midfielder addressed question marks surrounding his future in an interview with French outlet RMC Sport.

The Frenchman sparked controversy earlier this summer when he revealed that he was open to a ‘new challenge’, as quoted by the Guardian.

The Guardian’s report claimed that Zinedine Zidane sees the midfielder as the icing on the top of his massive rebuild of Real Madrid. It was also stated that former club Juventus were keen on a move for the superstar.

Pogba put the rumours behind him with a tidy performance against Chelsea this afternoon, whilst the 26-year-old could have improved in certain areas of his performance – his two assists for Marcus Rashford and Dan James were crucial.

Fans and pundits often question the star’s ability but there’s no disputing the fact that he’s United’s most talented player – even when he’s not in the best of form.

Pogba answered a question about his future at Manchester United in a post-match interview with French outlet RMC:

Pogba on his future: "There have been words. We always stay on that question mark. I'm in Manchester, I'm having fun with my team-mates, I want to win matches." #mulive [rmc] pic.twitter.com/eFO9zmlHcb

Here’s the full transcript of what was said, as per Mirror Football:

“I’m always good when I play football, I do what I love, it’s my job.”

“I will give my best every time I’m on the pitch. Now, we know that there were words. The future will tell.”

“One always remains on this point of questioning. I am in Manchester. I’m having fun with my teammates, I always want to win the matches.”

“I will always give myself thoroughly when I am on the ground.”

Pogba has largely failed to nail down some consistency with his displays since returning to United in 2016, the midfielder re-joined in a then world-record £89m move, as per BBC Sport.

Whilst United’s summer transfer window didn’t see the spending spree that fans would’ve hoped for, the acquisitions of Harry Maguire and Aaron Wan-Bissaka could help the Red Devils return to their former glory.

The pair were solid against Chelsea today and a transformation of the side’s defence – coupled with Pogba closing the door on an exit (for now), could see Ole Gunnar Solskjaer’s side win a place in the top four.

If United can find a way for Pogba to flourish in a more advanced role without leaving themselves too exposed at the back and in deep midfield, the Red Devils could finally get Pogba to perform at a high level on a more consistent basis.

We saw earlier today how lethal the side can be when the Frenchman is spearheading their attacks.