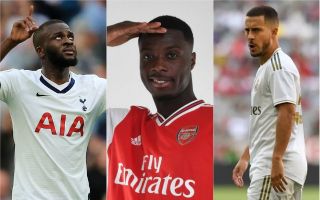 The summer may not be quite over yet as European clubs can still make signings and Premier League sides may still make sales.

However, one imagines that the bulk of the movement this summer has now been done, and what a transfer window it’s been!

MORE: Man United duo out, major exits at Tottenham – 10 big transfers that could still go through at Premier League clubs after deadline day

We’ve now attempted to put the best movers this summer into one combined XI, and the result is something pretty excellent, if we do say so ourselves.

Okay, so it wasn’t exactly the biggest summer in terms of goalkeeper moves. Last year saw something of a merry-go-round in that respect as Thibaut Courtois left for Real Madrid, bringing Kepa Arrizabalaga to Chelsea, while Liverpool signed Alisson and Arsenal brought in Bernd Leno.

Nothing that big this year, so we’ve gone for the highly-rated young shot-stopper Dean Henderson, who’s rejoined Sheffield United on loan from Manchester United. A quality addition for the newly-promoted outfit and one that Red Devils fans will hope serves their talented young player well for the future.

In the end, Juventus won the race for one of the most exciting signings of the summer, with Matthijs de Ligt turning down a host of other European giants to move to Turin from Ajax.

The 19-year-old is one of the biggest talents in world football and should prove a superb long-term addition for Juve, who have truly put together an exciting star-studded squad that could finally deliver the Champions League trophy this season.

A bit of a risk with the price tag, but Harry Maguire has finally joined Manchester United and their fans will be thrilled to have him.

The England international shone at Leicester City and is surely the top class defensive signing the Red Devils needed after they conceded a worryingly high 54 goals in the Premier League last season.

An outstanding right-back who one imagines Juventus might regret letting go, Joao Cancelo has joined Manchester City in what looks a fine piece of business.

The Premier League champions were able to offload unwanted defender Danilo Da Silva as part of this deal, and Cancelo should be a major upgrade.

What a transfer window Arsenal had in the end, with Kieran Tierney’s arrival from Celtic up there with the finest pieces of business by any team in Europe this summer.

The highly-rated young Scotland international looks to have what it takes to forge a big career for himself at the highest level, and Arsenal fans will hope he can have a long and successful stay at the Emirates Stadium.

Technically signed back in January, Frenkie de Jong has finally become a Barcelona player this summer in another inevitable raid on that Ajax side that looked so impressive last season.

Like De Ligt, De Jong played a big part in Ajax reaching the Champions League semi-finals and looks every inch a long-term Xavi replacement at the Nou Camp.