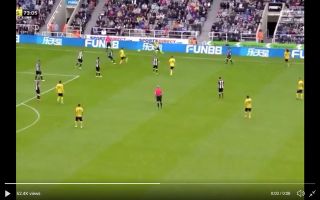 Nicolas Pepe was ridiculed by fans of Arsenal’s rivals this afternoon, many took to social media to blast this poor touch from the attacker on his debut.

Pepe was brought on for his debut in the 71st minute of Arsenal’s 1-0 victory over Newcastle today, the superstar attacker was fairly quiet on his first outing for the side which was understandable given today’s clash was a fairly dull affair.

The Gunners made the Ivorian their club-record signing by splashing out on £72m to sign the attacker from Lille, as per BBC Sport.

Some fans of Arsenal’s rivals took to social media to mock the ace after a poor touch following a throw in from the Gunners.

It seems as though these fans are just attempting to get under Gooners’ skins, the touch didn’t seem bad from Pepe and it looks more like a result of a miscommunication with one of his new teammates.

Here’s the video that has led rival fans to ridicule Pepe:

Take a look at some reaction to the ace’s debut from fans of some of Arsenal’s rivals:

Pepe against the Newcastle defence pic.twitter.com/yVlPxlkqdD

Nicolas Pepe couldn’t even get past Dummet ffs????

Pepe is just a btec Saint-Maximin

The drop of Pepe’s shoulder sent the Newcastle players?? pic.twitter.com/zJ561DntyI

Of course the star has a lot of work to do to get firing in the Premier League, but his debut certainly wasn’t as disappointing as rival fans are making out.

Unai Emery will be hoping to get Pepe firing as soon as possible as the Gunners finally look to put an end to their long-time wait for Champions League football.