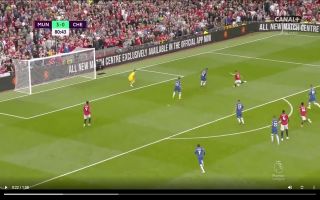 Dan James has scored a dream debut goal for Manchester United to make it 4-0 to the Red Devils against Chelsea, take a look at the strike below.

In the 81st minute of the clash United expertly defended a set-piece which led to Paul Pogba spearheading a counter-attack after playing a clever one-two with Anthony Martial.

The midfielder charged towards the goal and played a lovely pass into the path of James, the Welshman stuttered for a moment before firing the ball towards goal and a deflection saw the strike hit the back of the net.

What a moment for James, a debut goal at Old Trafford.

Take a look at James’ goal below:

What a moment for Daniel James on his debut at Old Trafford?? #MUFC #MUNCHE

James and massive from Pogba ??

Please retweet and follow our main account @goalstv3 to enjoy all live streams and goals on time.

United have run Chelsea ragged on the counter-attack in the second-half, Solskjaer’s side have destroyed Lampard’s team in the closing stages of today’s game.