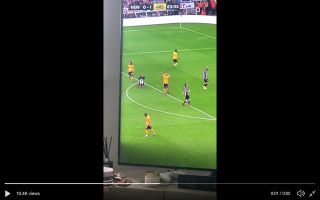 Allan Saint-Maximin excited Newcastle fans on his debut this afternoon, as well as the ace’s impressive dribbling fans liked the star’s acrobatic ability.

In the 83rd minute of today’s clash between Arsenal and Newcastle, Allan Saint-Maximin injected some excitement into a dull affair by exacting a perfect flip to get back to his feet after an attempt on goal.

The flip is widely known as a ‘kip-up’ and notable athletes that can pull off the stunt are WWE legend Shawn Michaels.

According to BBC Sport, the Magpies parted with £16.5m to sign the France youth international from Nice this summer.

Saint-Maximin comes across as quite the character and Premier League fans could fall in love with the enigmatic 22-year-old this season.

The France Under-21s star was thrust into the spotlight of the media given his decision to sport a luxury Gucci headband while playing for Nice last season.

Take a look at Saint-Maxim’s impressive acrobatics below:

Check out some reaction to the ace’s theatrics:

lmaoooo that kip-up from saint-maximin pic.twitter.com/l9neuCEjTU

More impressed with how he got back up

Allan Saint-Maximin is gonna be mad this season he’s crazy??

Newcastle fans will be hoping that the ace can show this kind of agility for the Magpies this season, the tricky winger was great last season and could inspire the side to a top-half finish.