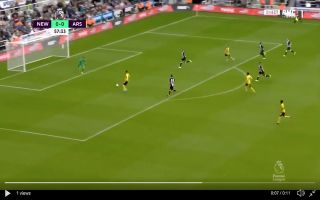 Pierre-Emerick Aubameyang has handed Arsenal the lead against Newcastle with a superb lob, the Gabon star is getting the defence of his Golden Boot underway.

In the 25th minute of the clash, youngster Ainsley Maitland-Niles latched onto a wayward pass from Newcastle and the versatile ace charged forward before playing a lovely cross in Aubameyang.

The superstar expertly controlled the ball before lobbing it over Newcastle stopper Martin Dubravka.

The goal shows off Arsenal’s devastating ability on the counter-attack.

Aubameyang will once again be aiming to get his hands on the Premier League’s Golden Boot this season, the superstar has started the campaign off in the perfect way with a lovely finish.