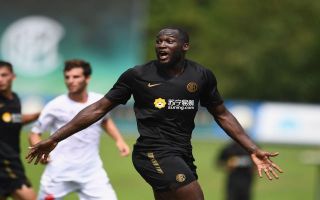 Inter Milan paid a lot of money to sign Romelu Lukaku and his debut suggests he might fit in perfectly in Italy.

Before Inter fans get too carried away it is worth pointing out that his goals came against lower league opposition in the form of Virtus Bergamo, but four goals in any game is an impressive performance.

The Belgian’s physicality is especially impressive as he completely dominates the opposition defence on his way to scoring the goals.

READ MORE: Inter Milan reject surprising striker swap proposal as they search for Lukaku back up

At points it looks reminiscent of kids trying to play against a team full of players who are a few years older.

Serie A kicks off in a couple of weeks so he will get a sterner test then, but he certainly looks like the perfect fit for his new side so far.