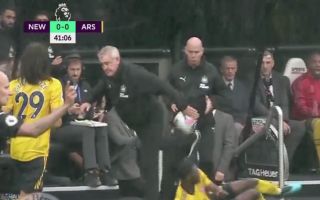 Fans flocked to Twitter this afternoon to poke fun at Arsenal midfielder Henrikh Mkhitaryan, with some even stating that he’s worse than Newcastle manager Steve Bruce.

The Armenian didn’t have the best first half of his career against the Magpies today, with fans picking up on this and comparing him to Bruce after the Newcastle boss pulled off a stunning back-heel touch on the sidelines.

Cristano has posters of Steve Bruce on his wall pic.twitter.com/ESdkYXqG1I

As seen above, Bruce managed a stunning first touch after the ball fell to him on the touchline, a moment that lead to supporters stating that he’s better than Mkhitaryan.

Given how the Gunners star played in the first half, we’re not surprised to see these comparisons made!

Great touch from Steve Bruce. He's had a better half than Mkhi.

Bruce has a better touch than Mkhi

Steve bruce has a better touch than mkhi