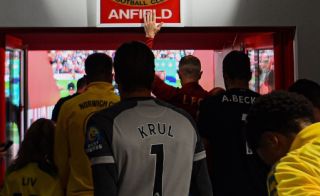 Liverpool midfielder Jordan Henderson could be seen touching the ‘This Is Anfield’ sign in the tunnel before the Premier League game against Norwich City.

Jurgen Klopp notably banned his players from touching the iconic sign until his Reds side won a trophy, which of course they have now done.

Henderson touching the "This is Anfield" sign ? #Liverpoolfc pic.twitter.com/FNU0Pzfxmy

It seems Henderson is now keen to enjoy the opportunity to touch the sign before games after captaining the club to Champions League glory last season.

The England international’s move did not go unnoticed by various Liverpool fan accounts – who absolutely loved it!

Henderson touching the "This is Anfield" sign ? #Liverpoolfc pic.twitter.com/FNU0Pzfxmy

Liverpool players have always touched the This is Anfield sign before games.

2015, Jürgen Klopp became manager & said no one could touch it until they won something.

After winning the Champions League last May, Jordan Henderson touched it walking out against Norwich tonight ?? https://t.co/DtT7gID3uh

champions league winning captain jordan henderson touching the iconic “this is anfield” sign, you love to see it x https://t.co/mLr3z0WgSs