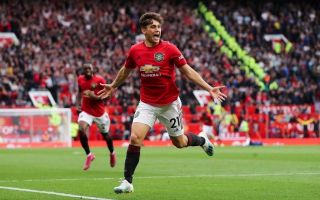 The young Welshman joined United from Swansea City in the summer in what was a fairly low-key signing in some ways due to James perhaps not being the big name many Red Devils fans will have wanted.

However, he’s made an immediate impact at Old Trafford, netting a well-taken fourth goal in Sunday’s thrashing of Chelsea to cap an emphatic start to the new Premier League season.

James’ joy at scoring for Man Utd was clear with his passionate celebration, and he’s now taken to Twitter to express quite how special a moment it was for him and his family.

What a result! Special moment for me and my family to score on my Premier League debut at Old Trafford! No better feeling. ?? pic.twitter.com/BQq8c6wiPF

The 21-year-old notably lost his father during the summer, not too long before completing a transfer to MUFC.

One imagines he’ll have been thinking of his dad after such a big moment in his career.