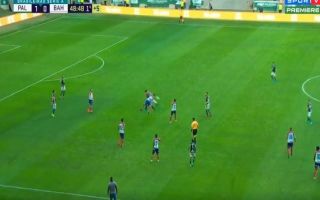 It’s fair to say that not all Brazilians play with flair and skill, they have had some absolute hatchet men through the years too. Felipe Melo absolutely comes under that category.

In a career that’s seen him amass at least 17 red cards and over 150 yellows, Melo has put in his fair share of woeful challenges. His career in Europe saw him play with Juventus and Inter Milan among others.

This might top it off as he brutally delivers a forearm smash that leaves the opponent out cold on the floor:

He’s still playing in Brazil at the age of 36 with Pameiras, but he doesn’t seem to have lost any of that trademark aggression.

Astonishingly he seems to be arguing with the referee over his decision to show the red card in the clip.

‘They would be practically unstoppable’ – Felipe Melo talks up new Barcelona quartet May 17, 2020 19:35
Inter Milan