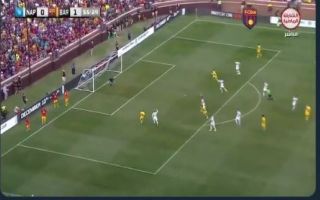 Barcelona looked at their scintillating best in their recent friendly win over Napoli. The game also included Antoine Griezmann’s first goal since signing for Barcelona and the passing move leading up to it was absolutely sublime.

Barca won the game 4-0 but this was the pick of the goals:

Barca kick off their La Liga campaign away to Athletic Bilbao on Friday night and will hope to bring this kind of form into the competitive fixures.

Griezmann already looks fully at home in this team and adds another terrifying factor for opposition defences to consider.