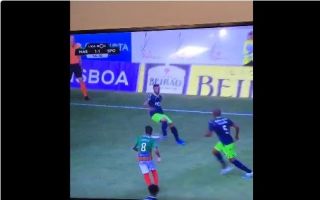 Bruno Fernandes was heavily linked with a move to the Premier League this summer with Man United and Spurs being the main teams in the chase for him.

A transfer never materialised and Fernandes is still a Sporting player for now. They will be disappointed to only pick up a 1-1 draw against Maritmo last night but the midfielder was able to show his class with a wonderful piece of skill:

He looked certain to move this summer after he broke down in tears in what looked like a farewell appearance against Benfica as reported by the Metro.

If he keeps showing this type of ability he may still get a move at some point soon.