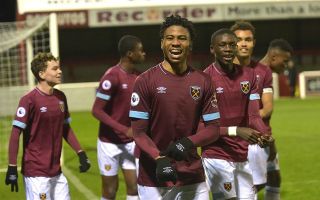 The 20-year-old has struggled to break into the Hammers’ first-team despite long looking a promising talent coming through their academy.

It remains to be seen what lies in store next for Hector-Ingram, but for now he’s made it clear he’s leaving West Ham for a new challenge.

On Twitter, Hector-Ingram said: “My Wonderful Time At West Ham Has Come To An End. From The Age Of 6 I Was At West Ham.

“Growing Up With Some Team Mates Who I’ll Consider As Long Time Friends For Sure!! Even Some As Family Too. Thanks To Certain Staff And Everyone Else.”

West Ham had a busy summer signing some big names, so their fans won’t be overly concerned by this departure.

Still, after the breakthrough of exciting young midfielder Declan Rice last season, WHUFC supporters will surely be keen to see more of their youth players make it into the senior side soon.