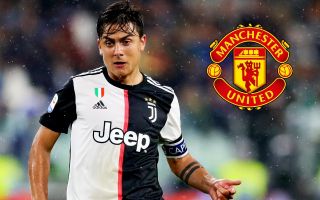 Ian Wright has criticised Juventus forward Paulo Dybala over his handling of the Manchester United transfer saga that went on this summer.

As noted by the Independent and others, the Red Devils were in negotiations for Dybala in what would have been a swap deal that saw Romelu Lukaku join Juve.

However, United eventually pulled out of the deal, according to the Independent, and Wright believes the Argentina international deliberately made negotiations difficult as he didn’t really want to join.

The former Arsenal striker also cast doubts over whether Dybala would really have added anything to Ole Gunnar Solskjaer’s side.

‘I don’t see Paulo Dybala as being the guy at Man United.

‘Getting Paulo Dybala in a makeweight thing for Lukaku, I’m not sure, I don’t think he would’ve been good at United.

‘I think he asked for that kind of money simply because he knew he wouldn’t get it.’

While it seems likely that United could do with more options in attack after selling Lukaku without signing a replacement, there are perhaps justifiable doubts over Dybala after his poor form last season.

The 25-year-old has long been considered a big talent but he seems short of achieving his true potential and fans will likely feel he wouldn’t have been a great signing if he wasn’t convinced by Man Utd in the first place.