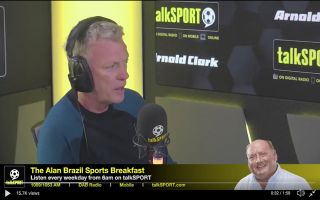 Former Manchester United manager David Moyes alluded to a bizarre reason as to why he decided not to sign Harry Maguire while he was boss of the Red Devils.

David Moyes pointed to some bizarre reasoning when he was questioned on talkSPORT on his decision to shun the signature of Harry Maguire whilst he was United boss.

Moyes took the Old Trafford hot seat in the 2013/14 season following Sir Alex Ferguson’s retirement, the former Everton boss endured a disastrous time and was sacked before the end of the season.

Maguire sealed a marquee move to United this week, the Sun understand that the Red Devils have broken the world record fee for a defender by paying £85m for the England international’s services.

Moyes revealed that one of the reasons why he didn’t sign the star from his boyhood club Sheffield United was that the star was really big.

Bizarrely Moyes stated that “he could only get bigger in his hips” when he was discussing the defender’s giant physical build.

Here’s what the Scotsman had to say on the centre-back:

“He was really big build-wise, you worried how big he was going to be!” ?

“At the time he wasn’t what Utd needed” ?

“Maguire has needed to go on his journey.”

David Moyes reveals truth behind reports he tried to sign @HarryMaguire93 at #MUFC in 2013 pic.twitter.com/EheUnE1OYx

Maguire started off his United career in the perfect way with a masterful display in the side’s 4-0 win against Chelsea.

Maguire looked cool, calm and composed as he dealt with every problem that came his way on Sunday afternoon, the Sheffield United academy graduate looks like the player that Ole Gunnar Solskjaer’s side have been crying out for.