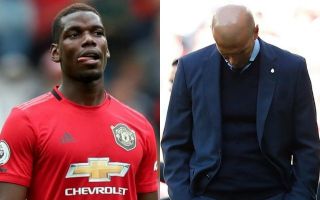 Real Madrid manager Zinedine Zidane is reportedly on the brink of resigning his position at the Bernabeu over the club’s failure to clinch the transfer of Manchester United midfielder Paul Pogba this summer.

That’s according to El Pais journalist Diego Torres, speaking to the Independent about Zidane’s fury at club president Florentino Perez over missing out on one of his personal priorities.

The report explains the background of Zidane’s return as Madrid manager last season, when he surprisingly rejoined the Spanish giants after leaving his job just a few months earlier.

The French tactician looked set to return with more control over transfers, according to the Independent, but it clearly has not worked out that way.

Pogba makes sense as a fine potential signing for Real, but it seems Perez has prioritised going in for Paris Saint-Germain forward Neymar instead, putting Zidane’s future in doubt, according to the Independent.

“Not signing Pogba puts Zidane on the brink of resigning,” Torres told the Independent.

“Zidane personally promised Pogba he would bring him to Madrid, and now he is left looking bad.

“This has only increased the lack of confidence between Zidane and Florentino. For Zidane, his project and Pogba are almost the same thing. Nothing that he was promised has really come to pass.

“Zidane returned as a protective shield for Florentino, but he has already fulfilled that political and social mission.”

Man Utd fans will no doubt be amused to see Los Blancos potentially falling apart due to their holding strong in keeping hold of Pogba this summer.