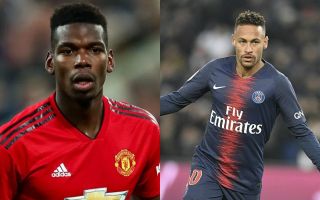 Real Madrid would reportedly end their interest in the transfer of Manchester United midfielder Paul Pogba if they can sign Paris Saint-Germain forward Neymar.

The Red Devils have faced a long summer of uncertainty regarding their star player, with the transfer deadline now gone for Premier League clubs, but European teams still able to make signings.

This means Pogba’s future remains unclear, particularly as the Mirror have quoted the France international as hinting he’s still not guaranteed to stay at Old Trafford.

However, there could be a significant boost for Man Utd if Real end up signing the £100million-rated Neymar as that would no longer make Pogba a top target for the Spanish giants, according to the Sun.

It remains to be seen if Madrid will definitely win the race for the Brazilian superstar, however, with the Sun also noting that Barcelona are in for him and that his lawyers were spotted entering Barca offices yesterday.

United fans have long been split on Pogba, who hasn’t exactly been at his best in his time in England, though at this point it surely looks like the best thing would be for him to stay.

Despite links with new midfielders throughout the summer, MUFC failed to get anyone in and could do without the disruption of a big name leaving.