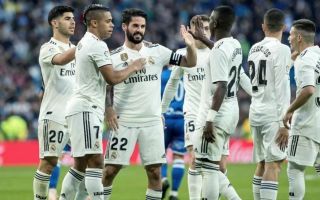 Real Madrid reportedly want €70m to sell Isco this summer, with AC Milan paired with an interest in the Spanish playmaker.

The 27-year-old endured a bitterly disappointing campaign last year, contributing just six goals and one assist in 37 appearances for the Spanish giants.

With Zinedine Zidane adding Eden Hazard and Luka Jovic to his squad this summer, coupled with ongoing speculation linking them with a move for Neymar, as per The Sun, it raises question marks over where Isco fits in moving forward.

According to La Gazzetta dello Sport, Milan could move for the Real Madrid star this summer if Gianluigi Donnarumma leaves, thus giving them the spending power to target either Isco or teammate James Rodriguez.

It’s added though that the Spanish international is said to be valued at a whopping €70m and so it remains to be seen if that’s a fee that Milan are willing to pay, or whether or not Real Madrid will ultimately have to lower their demands if they wish to see an exit materialise.

That is a hefty valuation for a player who struggled last year and one who hasn’t shown an ability to be consistent at the highest level as of yet. Further, given he turns 28 next April, Isco is entering the peak years of his career and so the next move he makes will be absolutely vital.

Time will tell if that’s a switch to Milan, but if Real Madrid are genuinely looking to trim the squad and wage bill to also balance the books this summer, it’s questionable as to whether putting a €70m valuation on Isco is a realistic way of moving him on.