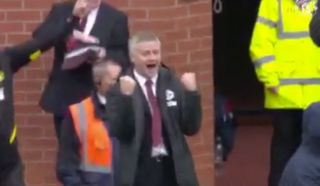 Perhaps missed at the time, a video of Ole Gunnar Solskjaer’s epic celebration for Manchester United’s third goal against Chelsea is now doing the rounds on social media.

Watch below as the Red Devils manager went wild on the touchline as Marcus Rashford slotted home to make it 3-0 against the Blues and pretty much kill the game.

United later added a fourth through Daniel James, but Rashford’s second goal of the game was probably the best piece of football Man Utd produced on the day and it really took the wind out of Chelsea’s sails.

No wonder Solskjaer enjoyed it so much, and fans will love seeing this passion from their popular boss!