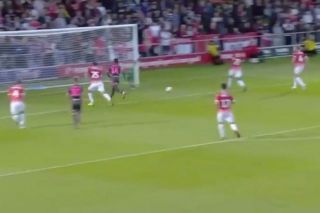 Arsenal loanee Eddie Nketiah wasted little time in impressing Leeds Utd fans as he found the back of the net on his debut on Tuesday night.

As noted by BBC Sport, the 20-year-old joined Marcelo Bielsa’s side on a season-long loan deal after struggling to make a sustained impression for the Gunners at senior level.

SEE MORE: Arsenal aiming to get rid of £80,000-a-week star ahead of transfer deadline with possible loan departure touted

Unai Emery will undoubtedly have been hoping that the move gave him more opportunities to play regularly and score goals to build his confidence and form, and it appears as though it could turn out to be a very sensible move.

As seen in the video below, Nketiah scored on his Leeds Utd debut in their Carabao Cup clash with Salford City on Tuesday night, making a brilliantly timed run into the box to apply the easy finish.

It’s that type of instinct in front of goal and in the box that could see him flourish at Arsenal in the future, and a successful loan spell with Leeds where he scores plenty of goals could certainly help him eventually secure a place in the Gunners squad for the long term.

Arsenal loanee Eddie Nketiah grabs his first goal for #LUFC as they take the lead in Salford!