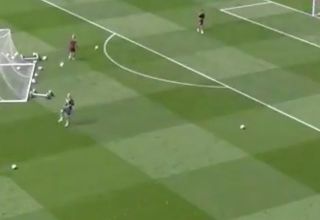 John Terry may well have hung up his boots some time ago, but the Aston Villa assistant coach certainly hasn’t lost it just yet.

Along with Villa boss Dean Smith, the pair will hope to mastermind their side bouncing back this weekend when they host Bournemouth.

It comes after a defeat to Tottenham in their opening fixture of the Premier League campaign, with Spurs fighting back to secure a 3-1 victory despite John McGinn giving Villa an early lead.

There were some positive signs for Smith to take away from the encounter, but judging from this clip in training during the week, he may well be wishing he could call upon Terry to partner the likes of Tyrone Mings and Bjorn Engels in defence.

Despite the ball being lofted up miles in the air, Terry showed a stunning first touch to bring it under control. However, he couldn’t find a finish to match it as his chipped effort hit the bar. Given the class of the control, we’ll give him the benefit of the doubt and say he meant it…

Gunshots at Cobham: A decade on from one of the darkest days in Chelsea’s history

Photo: John Terry dons the famous No.26 as he helps renovate Surrey mansion