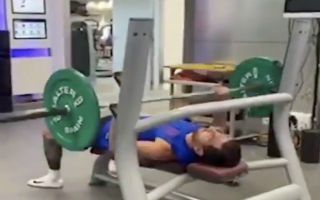 Barcelona superstar Lionel Messi is doing everything he can to be fit in time for a La Liga clash against Atheltic Bilbao on Friday.

The Spanish champions will open their 2019-20 campaign away at Bilbao, as they set their sights on a third successive La Liga title.

Unfortunately, Ernesto Valverde may be without club talisman Messi for the clash, who has been out of action since tearing his calf in a training session at the start of August.

The Argentine played no part in Barcelona’s pre-season, having only just returned to Camp Nou following international duty before picking up the injury.

However, Messi has been lifting weights in the gym as he steps up his recovery ahead of Barca’s La Liga opener and he certainly looks mobile enough to perhaps earn himself a place on the bench.

Check out the 32-year-old doing some shoulder work, bench-pressing and abdominal exercises below, via Twitter.