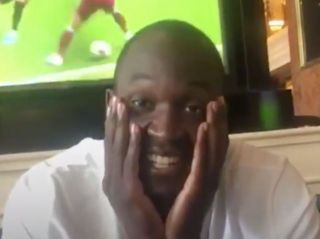 Romelu Lukaku is busy settling into life at Inter after his move from Man Utd on deadline day, but it looks like it’s hard work for the Belgian striker.

As noted by BBC Sport, the 26-year-old completed a £74m move to join the Italian giants, ending his spell with the Red Devils after a disappointing campaign last year.

Adjusting to a new culture, environment and squad is difficult enough, but it appears as though the changes in training and nutrition are also taking their toll on the former United star.

He looks as though he’s taking it in his stride though as while he cut an exhausted figure in the video below, he was in good spirits as he conceded that the training sessions under Antonio Conte are hard and that his diet is mostly consisting of salad thus far.

Lukaku also sent an important message to the Inter fans though insisting that he hasn’t moved to Milan for the city, as his primary focus is on winning something with the club.

Time will tell whether or not he can help deliver trophies in the coming years, but he’s seemingly working very hard in pre-season this summer to be at full fitness for the start of the new Serie A season, and that would have been the minimum expectation under a coach like Conte.

The difference between football in England and Italy? @RomeluLukaku9 has the answer… ?? pic.twitter.com/Zyv5NFHiTq