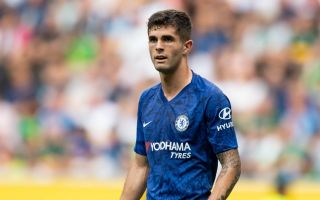 Chelsea summer signing Christian Pulisic has had a great first half against Liverpool in tonight’s Super Cup clash.

The USA international has been given the difficult task of replacing Eden Hazard at Stamford Bridge, with the Belgium international leaving for Real Madrid in the summer transfer window just gone.

Still, Pulisic has long looked an exciting young talent and he’s looking the real deal for Chelsea now as well, having produced a sublime assist for Olivier Giroud to give the Blues a 1-0 lead over Liverpool at half time.

It’s fair to say loads of fans have been impressed by Pulisic, and many are saying he has Hazard-esque abilities and could end up being a very capable replacement for him in the long run.

The 20-year-old is obviously still young and developing, but he’s showing very promising early signs and should already be an important player for CFC.

Pulisic needs to relax. Giving me some Hazard vibes

Man! This offside goal from Pulisic reminds me of Eden Hazard.

#kante is a beast???? #Pulisic will clearly replace hazard

Pulisic could turn out to be our new Hazard.