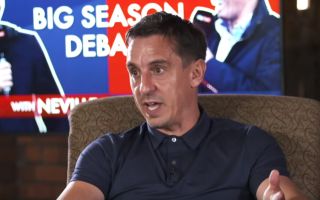 Gary Neville has revealed that Man United refused to make a a £50M move for Jerome Boateng during Jose Mourinho’s time in charge at Old Trafford.

Mourinho left his job at United boss mid-way through last season, with the club then replacing the Portuguese coach with Ole Gunnar Solskjaer.

The former Chelsea manager left the Red Devils having won three trophies during his time at Old Trafford, and we’re sure some fans of the club are thinking that they could’ve won more should United have bowed down to Mourinho’s demands during his time in charge.

Whilst speaking on Sky Sports’ ‘Big Season Debate’, former United man Neville revealed that United weren’t willing to sanction a £50M move that Mourinho wanted to make for Boateng, who at the time was playing for Bayern Munich.

When speaking on the show, Neville stated “what the Glazers and Ed Woodward have realised in the last 18 months is that they’ve stopped saying ‘yes’ to managers. Jose wanted to sign Boateng for £50M.

Neville then added “I probably would’ve blocked that one myself if I was the owner of a football club”, implying that United themselves blocked a potential swoop for the German during Mourinho’s stint as manager.

It’ll be positive to hear for United fans that their club have stopped their willingness to just through cash around, especially at players that are somewhat injury-prone such as Boateng.

The club have bought wisely this summer through the purchases of James, Maguire and Wan-Bissaka, signs that are promising in regards to the club’s future plans for their first team squad.