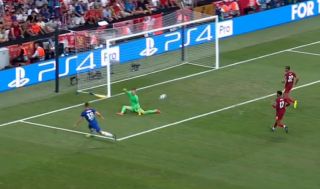 Olivier Giroud has opened the scoring in tonight’s Super Cup to make it Chelsea 1-0 Liverpool.

The France international finished well from close range after some clever play by Christian Pulisic, who dragged defenders away from Giroud before playing him in with a perfect reverse ball.

Giroud scored in Chelsea’s Europa League final win over Arsenal to set up tonight’s clash with Champions League winners Liverpool, and he’s bagged a big goal for the Blues once again.

It’s also the first competitive goal of the Frank Lampard era at Chelsea, with two players who didn’t start in the defeat against Manchester United coming up with the goods.