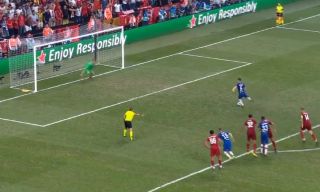 Jorginho has scored a delightfully cool penalty to make it 2-2 in tonight’s Super Cup clash between Chelsea and Liverpool.

The Italy international stepped up and passed the ball into the back of the net in some style to level up this thrilling encounter in Istanbul, which could well be heading for a penalty shoot-out.

Chelsea had initially gone 1-0 up in the first half, but Liverpool fought back to make it 1-1 and force extra time.

Sadio Mane then put the Reds ahead for the first time but Chelsea have hit back quickly thanks to Jorginho’s cool finish.