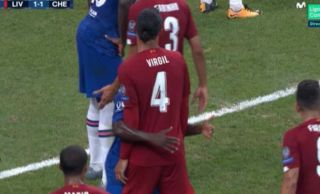 Chelsea midfielder N’Golo Kante is an absolute powerhouse in midfield and undoubtedly one of the finest players in the world.

However, he’s not exactly the tallest, and therefore perhaps not the man you’d want marking towering Liverpool centre-back Virgil van Dijk at a set-piece.

See the image above as Kante gives it his best go, putting his arms around the Dutchman in a manner that makes him look like a small child trying to hug his Dad.

This is a hilarious mismatch and we’re not sure Chelsea thought their tactics through here, but the picture is doing the rounds on social media right now as everyone loves Kante giving his best effort even in this pretty impossible situation…

Kante marking Virgil van Dijk during a corner is the most innocent picture you'll see today. Look at him ?? pic.twitter.com/gnqBtgQBcM