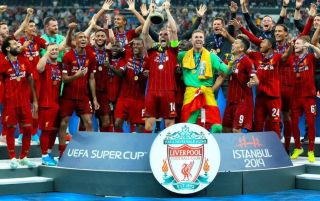 Liverpool added another trophy to their collection on Wednesday night as they beat Chelsea on penalties to lift the UEFA Super Cup.

The Reds won their sixth Champions League title last season to set up this contest with the Europa League winners, and they won 5-4 on penalties after the game finished 2-2 in extra time.

Liverpool fans are understandably delighted at their success, but some are wrongly claiming this now makes them the most successful English club in terms of trophies won.

A number of tweets of that nature are doing the rounds, with varying numbers being tweeted out as LFC fans celebrate supposedly knocking Man Utd off their perch.

Even former Liverpool star Jamie Carragher referenced this tweet in an attempt to troll former United star Gary Neville, but it’s only true if you don’t count Community Shield wins.

Every country counts the national supercup as a major trophy. Don’t care that Wikipedia says it’s a minor trophy, the community shield is counting and we’re now 6 trophies above Liverpool.

As shown on Wikipedia, MUFC remain ahead on 66 trophies to 61 won by their bitter rivals, and we see no reason not to count the Community Shield.

Yes, it’s a one-off game at the beginning of the season that is not usually taken too seriously, but it’s a fixture with history and tradition that sets it apart from pre-season tournaments such as the Emirates Cup that have come along more recently.

Liverpool are now the most successful team in England. ?#lfc #SuperCup pic.twitter.com/e3ocP6C6TX

Liverpool are now the most successful team in England with 46 trophies.!!!

Liverpool with 46 major trophies! Most successful team in England ??????

And if we’re writing off a trophy on that basis, then why would Liverpool’s Super Cup tonight be any different?

If it’s part of the footballing calendar and you get a trophy for it, it’s a trophy. Simple. Sorry, Liverpool fans.