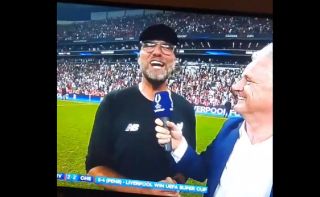 Liverpool manager Jurgen Klopp did his best Rocky impression after goalkeeper Adrian helped his side to a penalty shoot-out win over Chelsea in the Super Cup.

Some memes had been doing the rounds online of a famous Rocky scene in which he shouts “Adrian!” and Klopp went there and did it himself in his post-match interview.

The German tactician is not only a great manager but a hugely popular figure at Anfield precisely because of moments like this.