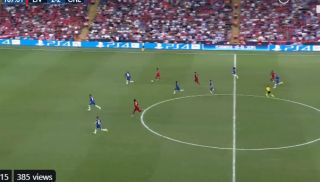 Anything N’Golo Kante can do, Mohamed Salah can do better, apparently!

Watch the video below as the Liverpool forward manages to nutmeg two Chelsea players over the course of one run as he turns on the style in Wednesday night’s Super Cup clash.

Salah hasn’t perhaps had his most effective game tonight, but this breathtaking moment of skill shows just how big a talent he is.

Liverpool fans will love seeing him taking on Chelsea all on his own – particularly as the Blues had him on their books as a youngster and decided not to keep him!

“I don’t like it, I hope it doesn’t happen” – Liverpool star James Milner fights to save football in superb post-match interview
More Stories Mohamed Salah