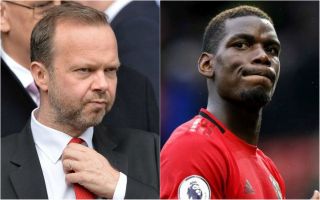 It now looks increasingly unlikely that the Red Devils will sanction a sale, which is hardly surprising given the transfer window is no longer open for Premier League clubs.

While this does not necessarily prevent sales, it means Man Utd could not sign a replacement for Pogba until January, and that would undoubtedly be a huge risk.

According to AS, Woodward understands that letting the France international leave would surely put his job at Old Trafford in doubt due to the huge backlash from fans.

The United chief is already pretty unpopular with the club’s supporters, having shown himself to have a patchy record in the transfer market since he took over.

MUFC have spent huge amounts of money on big-name flops like Angel Di Maria and Romelu Lukaku, while some would also put Pogba in that bracket, even if he’s generally been a bit more reliable.

Even the strongest anti-Pogba section of the United fan-base would surely agree that letting the 26-year-old go without a replacement now would be near suicidal for the club.

Ander Herrera and Marouane Fellaini have also left in recent times, and Pogba’s departure would mean relying on below-par performers like Nemanja Matic and Fred even more.