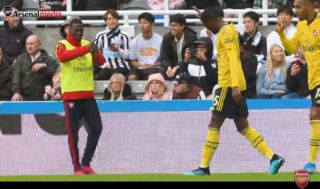 Arsenal’s new signing Nicolas Pepe mainly watched his first game for the club from the bench as they enjoyed an opening day Premier League win over Newcastle.

Pierre-Emerick Aubameyang scored the decisive goal early in the second half from a quality piece of play by right-back Ainsley Maitland-Niles.

The Gunners youngster clearly impressed Pepe with his assist for Aubameyang, as Pepe applauded it from the sidelines and pointed at him to give him special recognition.

It’s only a small gesture, but it shows the Ivory Coast international seems to be settling in well with his new team and that the spirit in the Arsenal camp looks good going into the new campaign.