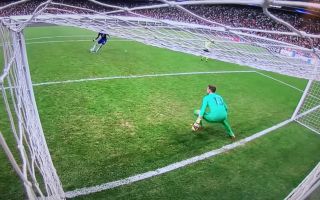 Chelsea fans have claimed that Tammy Abraham’s penalty should be retaken after they spotted the fact that Adrian was off his line for the Blues star’s decisive spot kick tonight.

Liverpool beat Frank Lampard’s side 5-4 on penalties after they drew 2-2 in normal time, with Abraham losing the game for the west London side, after he saw his penalty saved by new Reds ‘keeper Adrian.

And following this miss, fans of the Blues flocked to Twitter to claim that Abraham’s missed spot-kick should be retaken, after Adrian was off his line for it.

As per the BBC, a new rule was introduced this year stating that a goalkeeper must have at least one foot on the goal line when a penalty is taken.

We just going to ignore Adrian going over the line ?smh

Adrian was about 2 yards off his line, why hasn’t VAR ordered a retake?

Adrian was off the line! Liverpool cheated!

Wait a second shouldn’t the pen have been retaken??? Adrian so far off his line, refs usually call that nowadays.

Adrian too early off the line, penalty has to be re-taken!? #Chelsea #Supercup#LIVCHE #var pic.twitter.com/DFnVOyGjDp

Clearly, both Adrian's feet were off the line when Tammy's penalty was taken .. Penalty should've been retaken & Adrian should've been booked .. VAR IS A FARCE !!! #SuperCup #LIVCHE pic.twitter.com/0uXZRFjEZF

Adrian off his line, penalty should have been retaken pic.twitter.com/doVe2Tax6O