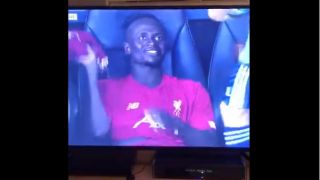 Liverpool star Sadio Mane showed he’s a class act as well as a great player with a surprise treat for a ball-boy in Wednesday night’s Super Cup clash against Chelsea.

This video has emerged online of what appears to be the brief period before the start of the penalty shoot-out that settled the contest between Liverpool and Chelsea.

While preparations are going on, Mane calls a ball-boy over with a serious look on his face before revealing a shirt for him and giving him a hug.

It’s a truly lovely moment from the Senegal international, who was in great form on the pitch to score twice for Jurgen Klopp’s side as they picked up another European trophy.