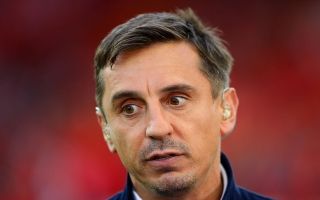 Some Premier League fans will be shocked to see that Gary Neville has backed former club Manchester United to win the league title again before Liverpool manage to.

The Red Devils last won the league in the 2012/13 season, Sir Alex Ferguson’s final season before his retirement.

Liverpool on the other hand have never won the Premier League since it’s induction in 1992, the Reds are at the best they’ve been in years with Jurgen Klopp inspiring the side to a Champions League triumph.

The Merseyside outfit are expected to once again be in a two-horse race for the league title with Manchester City, which makes Neville’s admission even more surprising.

*This debate was held before the season started last week.

You can watch Neville speaking about United’s title chances after the 7.30 mark in this video:

Here’s what Neville had to say for those who don’t wish to watch the video:

“What I’m saying is, Liverpool, City, Tottenham, all these clubs have had poor recruitment policies over the last 25 or 30 years at times,”

“So United are going through one at the moment.”

Neville also had this to say when Jamie Carragher revealed that United won’t win the Champions League before Liverpool though:

“Maybe not, but I think they’ll win a league before Liverpool.”

“They’re more ripe, they’re closer than you think and it’s not as bad as you think. That’s always the way it is.”

Ole Gunnar Solskjaer’s side started off their new campaign with a emphatic 4-0 victory over Chelsea in Frank Lampard’s managerial debut.

Even considering the Red Devils’ amazing performance it’s still far too early to say whether or not Solskjaer’s side are title challengers.