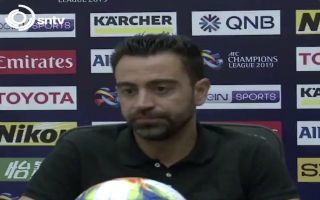 Former Barcelona midfielder Xavi has dismissed comparisons between him and Pep Guardiola, insisting the Manchester City boss is “on another level”.

Xavi was appointed as Qatari club Al Sadd’s head coach back in July, having retired as a professional footballer earlier in the year.

The Spaniard has overseen two competitive matches so far, in an AFC Champions League round of 16 tie against Al Duhail, which ultimately ended with his side qualifying for the quarter-finals.

Al Sadd drew the first leg 1-1 away but won the return fixture 3-1 on Tuesday, with Xavi making a bright start to his coaching career in the middle east.

After the match, Xai played down comparisons with Guardiola, whom he worked under for four trophy-laden seasons at Barcelona between 2008 and 2012.

When quizzed on potential similarities between himself and the Man City manager, the Barca legend told a press conference: “I am happy today, of course. But Guardiola is on another level.”

‘Guardiola is on another level.’ Xavi plays down comparisons with the Manchester City boss. #MCFC pic.twitter.com/AEzUEj9dBx