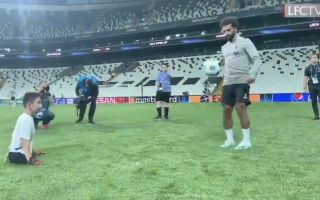 Liverpool talisman Mohamed Salah made a disabled supporter’s day by having a kickabout with him at a training session before the UEFA Super Cup final.

The Reds have been preparing for a date with Premier League rivals Chelsea in Istanbul on Wednesday night, with the Champions League and Europa League winners set to square off for yet another piece of silverware.

Liverpool head into the match fresh from a 4-1 win against Norwich on the opening day of the new season, while the Blues will be looking to bounce back from a stunning 4-0 loss to Manchester United at Old Trafford.

Salah took some time out from a pre-match session to train with a disabled fan ahead of the Super Cup clash, playing keepy uppy’s with the boy before another kid also came over to join in.

Mohamed Salah is a real one ??

This is what I will remember from Istanbul @MoSalah with this great player @LFC pic.twitter.com/V15bxweVcF